Spent was an installation / performance collaboration with choreographer/dancer Tony Yap. Commisioned initially for the 2009 Murray Darling Palimpsest #7, Mildura, Spent was then presented in 2010 at the Gold Mining Exchange Building, Ballarat, and the Horsham Regional Art Gallery (temporary Jubilee Hall premises). 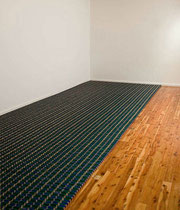 For close to two decades, a considerable part of Anthony Pelchenʼs work, across mediums, has woven together memories and images that reflect the beauty and austerity of the Wimmera. The floor installation, Spent, contains some 27,951 used shotgun cartridges that form a colour-coded carpet, an aesthetic totality of many parts. It is large, compelling and mesmeric like a tribal rug and takes its source from the country west of Horsham where Pelchen lives and works. It is loaded with physical associations and issues of belonging and isolation, of the dual anatomies of life and death, drought and abundance. As a boy visiting the familyʼs land that borders the Wimmera River, Pelchen would accompany his father through paddocks and along the river at dawn. He would watch the shooter discard cartridges as the sound of the shotgun fractured the morning. It taught him the importance of stillness and the agony of disruption, the moment between life and death. This carpet is, however, much more than a patterned aftermath; it also holds a dark ontology, a metaphor for Pelchenʼs own drained body, a casualty of a prolonged illness. Out of this painful episode he realised ʻthe potency of order [that] relies on the potential for disorderʼ, a contradiction that activates his search for spiritual and bodily regeneration. Each episodic realisation acts as a testimony of endurance that is transformed into powerful, ordered, visual installations awaiting the inevitable act of disruption.

An artistʼs personal history naturally inhabits their work, but with installation and collaborative performances there are many physical and psychological experiences that motivate both the artists and their audience. Pelchenʼs work embodies several geographies and lives, and involves a repertoire of emotive journeys. He has established a working relationship with the choreographer, dancer and performer Tony Yap for over a decade, and the film-maker Sean O'Brien, who has been documenting Yap's life and work since 2005. Each artist building an understanding of one anotherʼs creative practices and developing a use of the ʻbodyʼ as a vehicle through which each filters memories, ideas and emotions.

The spatial austerity and the natural beauty of the Wimmera is Pelchenʼs canvas and aesthetic laboratory, and for Tony Yap, who also has links with this region, the land and the river lends itself to explorative meditations on absence, loss, death and the regenerative and mystical forces of nature. Both artists revere the spatial and visual poetics of this particular landscape. It provides a transformative setting for shared values, in which beauty, order and equilibrium starkly counter the disruptive passions of pain and sorrow, all central to their personal and collaborative productivity. A carpet of empty gun cartridges is physically disrupted by the performer and may be seen as life ruptured and spent and reorganised by chance. It is an exquisite, empathetic drama, a contemplative penetration of still life into life. Tony Yap feels the parameters of Pelchenʼs memories, the edges of the carpet are psychological walls he must engage with before bodily and emotionally intruding and shattering the visual order. The sense of violation, of having committed an insane crime against such harmony is replaced by the bodyʼs final surrender to majestic exhaustion.

Physically and emotionally spent, and emptied of his frenzied delirium, Yap is able to return to the original source of memory; the imprint of the black swallow is a metaphor for the fluttering heart of life.

In Well, Anthony Pelchen sets Yapʼs performance, filmed by O'Brien, into a black box so that we may look down into a darkened shaft. The visual distancing that this creates gives a sense of entering another world and we are drawn into a strangely beautiful melancholy, the gentle motion of eastern dance and meditation. As early morning mists lift and are carried along the river, the viewer is transported past reflective skies and large river gums, while the solitary figure divines the awakening world. Light plays with the earth, sky and water. Yap quotes Tatsumi Hijikata, the founder of the Japanese dance form Butoh: (the dance becomes) ʻa mirror that thaws fear. The dancer should dance in this spirit ... it is the unveiling of the inner lifeʼ. I would add that the dance is a salutation and an invitation to enter outside the self and into the darkness of the river, into its vaporising mists and the sentinels of old red-gums, to roam beyond the body and among the shadows and reflections of land and sky.

Anthony Pelchenʼs art is grounded by the land. He recognises the flatness and the rich austerity of openspaces, the pinnacles of the Grampians and the serpentine Wimmera River as signal points to guide his eye. But contained in his art practice is an embodiment of western and eastern concepts of energy, appearance, spiritual phenomena and the desire for order and disorder. Without one the other cannot exist.

Installations of Spent have been previously presented in 2009 in Mildura (commissioned for the Murray Darling Palimpsest #7) and Ballarat (at the Ballarat Gold Mining Exchange Building in conjunction with Ballarat University). Each installation is site specific, with varying dimensions and colour sequences. The collaborative video, Well, is a companion work which has been shown at each location in conjunction with Spent.